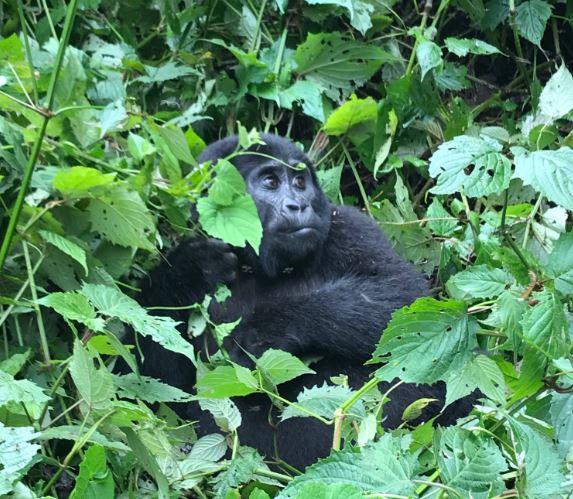 We stared out the windows of the van as Benon, our driver, steered us north on the main highway out of Kigali towards Uganda, our next stop. Overloaded bicycles, topped with burlap sacks filled with produce, were pushed, tugged, and prodded uphill by their weary riders; thousands of people, many of them with baskets, clothing, and even logs balanced on their heads, walked alongside the traffic; and beyond the road, the thousand hills of Rwanda stretched into the distance, with gorgeous fields of rice, tea, mangos, avocados, and other crops that marched in terraces straight up the steep hillsides all the way to the very top (not even Italy’s Cinque Terre boasts such steep terracing).

After a long day of driving and gawking, we finally arrived at our destination, the Baciga Lodge, just outside the Bwindi Impenetrable Forest. We drove the last hour or so on a rutted, rocky, unpaved road in almost complete darkness, save for our headlights and the occasional small house tucked into the hills. After brief, sleepy introductions to our hosts, we made our way to our rustic-but-comfy cabins on the hillside, threw our bags inside, and went directly to bed.

The next morning, we awoke before 6AM and were greeted by stunning views into Bwindi as the dawn came up and the mountains were slowly revealed in their misty, green splendor. We piled into the van and Benon drove us into Bwindi itself to meet our guides, who would take us into the forest to meet “our” family of gorillas (the “Mukiza” group of 13 gorillas, named after the DSB – dominant silverback – who leads the group). There are a total of 32 gorilla families in the Bwindi Impenetrable forest, only 19 of which have been habituated to humans. To lessen the impact of visitors on the gorillas and their habitat, visits are limited to only one hour per day per gorilla family, with a group of no more than 8 visitors.

After a brief presentation by a local singing group based in the surrounding Baciga community (a kind of cooperative living arrangement where the locals support the gorilla trekking industry and vice versa), our guide gives us a short list of rules for our gorilla encounter: don’t approach closer than 7 meters (although the gorillas may come closer if they feel comfortable), don’t eat or drink anything, don’t talk unless you have to and then only in a whisper, don’t take backpacks or bags when we’re with the gorillas, don’t use the flash on our cameras. With that, our group of 6, plus our two guides, headed off into the forest to find the trackers – and the gorillas.

After two and a half hours of climbing and descending through some pretty dense vegetation (it isn’t called the “impenetrable forest” for nothing), and some close encounters with fire ants and foot-long earthworms, we locate a group of three trackers who have been following the Mukiza group. They greet us cheerily and show us exactly where the gorillas are – just about ten or so meters from where we’re standing in a small clearing. We take off our backpacks and leave them with the trackers, then head off with our guides to meet Mukiza and the twelve other gorillas in his group.

We make our way carefully through the low brush, our guides leading the way and clearing the more impenetrable vegetation with machetes. Suddenly, directly in front of us, we see them: a mother and her small toddler, sitting calmly in the brush and pulling leaves off the low plants to feed herself and her infant. Beyond them, another female plays with her younger brother, tickling him and biting him playfully on the arm; when he runs up a bamboo stalk to get away, she pulls him back down and they begin playing again. Behind us, farther up the hill, we hear the other gorillas as they crack branches and pull bark and leaves to eat.

We are all very, very quiet, transfixed by the sight of these gentle, calm creatures having their breakfast and playing in the forest. The most striking thing about them is how human they seem – the way they interact with each other, communicate with low huffing and grunting sounds, scratch and groom themselves, play, tickle, and eat, is all uncannily evocative of our own behaviors. It is a startling revelation, like meeting a long-lost third or fourth cousin and being struck by how much they look and act just like you. And their eyes: deep, dark, and reflective, when a gorilla stares at you with those eyes, you know you are engaging with a complex, sentient being, capable of thought and feeling.

It is no wonder that gorillas seem so human: humans and gorillas share about 98 percent of our genetic material, diverging from each other only about six million years ago (that’s pretty fast in evolutionary terms). We have even more in common with chimpanzees (another of the Great Apes along with gorillas, bonobos, orangutans, and us humans), sharing 99% of our genetic material with them. We humans are about 99.9% genetically identical to each other, for all our seeming variations in skin color, height, eye color, and other secondary human attributes.

As the minutes pass and we continue to observe the gorillas (and even interact with them, as the toddler climbed right up the hill toward us, brushing right by us on the way to tastier greenery above), we notice further similarities in a wide range of behaviors, from cuddling and playing to eating, bed-making, napping, and just walking around being curious about their environment (and us). It is jarring and thought-provoking; Dian Fossey, the great American primatologist and first-hand chronicler of these mountain gorillas, observed and described even greater similarities as she lived with and studied them for about 18 years on the slopes of Mount Bisoke in Rwanda, describing gorillas as “dignified, highly social, gentle giants, with individual personalities, and strong family relationships.” The last entry in her diary, before she was murdered in her tent on December 26, 1985, reads: “When you realize the value of all life, you dwell less on what is past and concentrate more on the preservation of the future.”

Our allotted time with the gorillas was soon over, and after an hour, we carefully made our way back to the trackers, retrieved our packs, and chatted with them about our experience. We, of course, were not the only ones to be profoundly affected by the similarities between us and our gorilla cousins; many other visitors also come away with similar feelings of strong connection, not only with the gorillas, but with each other, as they realize just how deep our similarities are – and how superficial our differences.

The point here, of course, is not that because we’re all so genetically similar we should “all just get along.” That’s far too naïve, utterly unrealistic, and flies in the face of thousands of years of the history of human civilization with its countless wars, atrocities, and chronicles of man’s inhumanity to man (not to mention the cruelties we’ve inflicted on many of the rest of our more distant relatives on this planet). Gorillas may be “social, gentle giants” but they fight and kill to establish and defend territories, mates, and social pecking orders. Humans, too, fight and kill for much the same reasons, and Frans de Waal’s 1982 tour de force, Chimpanzee Politics, described just how similar humans are to chimpanzees as they strive for social status, forge alliances, deceive each other, and forgive each other. The point, rather, is to realize the evolutionary and genetic underpinnings of our own behavior, to recognize that these behaviors are not unique to humans and are shared by others among the Great Apes, and that we can learn an awful lot about ourselves (and possibly solve some of our more pressing social and political problems) by studying them further and absorbing these lessons. We have the opportunity, as humans, to examine our own behavior and to realize when it is driven by more primitive impulses (fear, anger, hatred) and to interrupt that behavior by pausing, reflecting, and then responding with more thoughtfulness and less impulsivity. Understanding our deep connections, not just with each other and with the other Great Apes, but with all living creatures on the planet, is the first step toward being more compassionate – more kind, caring, and willing to help others – and that is one of the most important lessons the gorillas have to teach us.