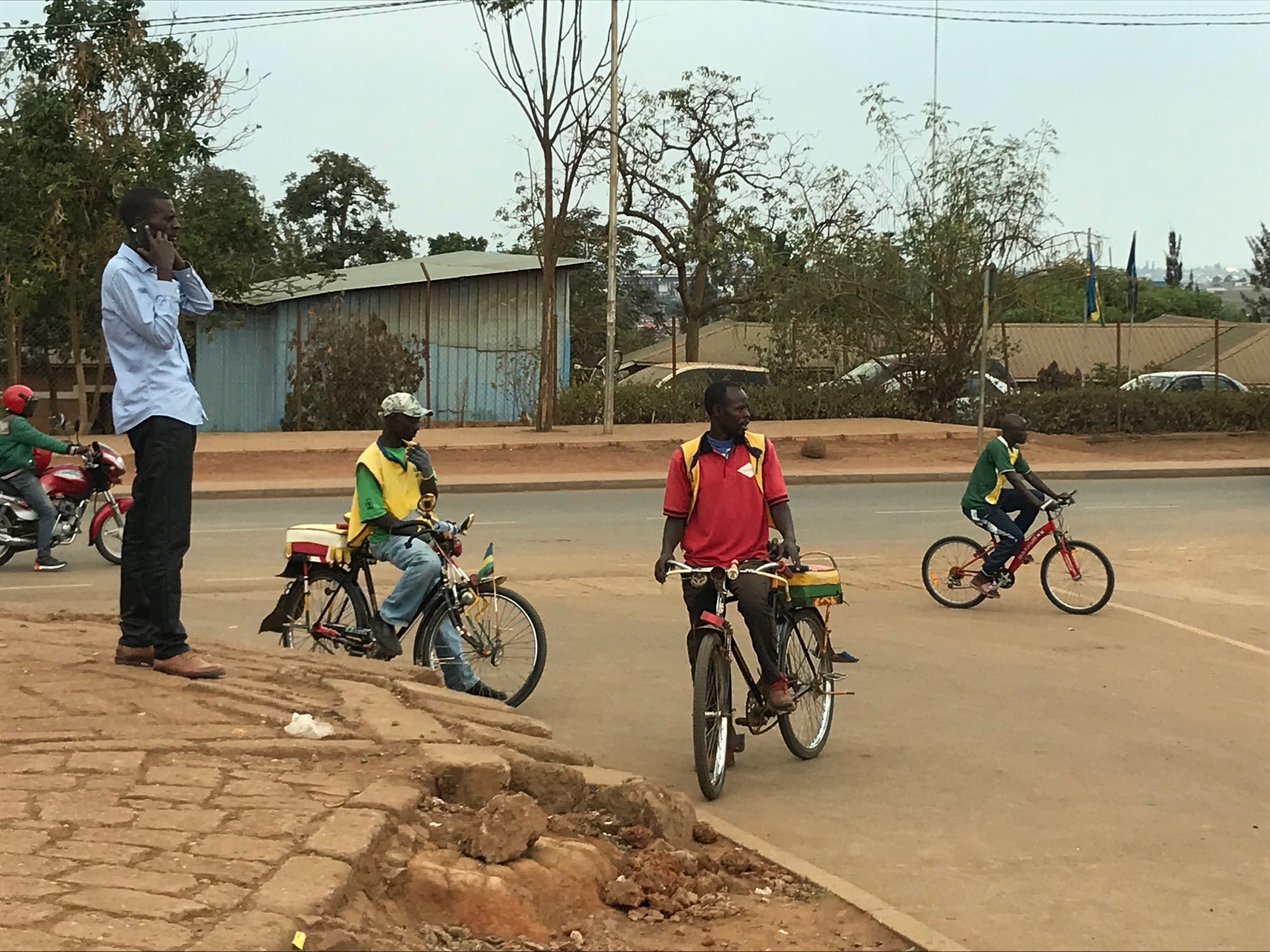 One striking thing we noticed in the first part of our trip, through Rwanda, Uganda, and parts of South Africa, was the incredible industry and optimism of the people we encountered, in spite of the widespread poverty and general lack of resources.

In Kigali, Rwanda, we saw thousands of bicycles and small motorcycles in use as taxis and delivery vehicles, swarming nearly every intersection. We asked our guide, Claude, about the drivers, and he said that many were renting the vehicles from their owners and operating small taxi services, while others had worked and saved enough money to buy their own bikes or motorcycles, and in turn rent them out to others just getting started, keeping the cycle going (no pun intended). The huge influx of people into Kigali, drawn from the countryside by new opportunities (the city was booming, full of new construction and bursting at the seams), meant an almost insatiable demand for taxi and transportation services, and local Rwandans were taking full advantage of the opportunity to make a living and, for some, eventually start their own small businesses.

As we drove to Uganda along the main north-south highway (there’s really only one), we saw the break-down lanes on the sides of the main road crowded with bicycles and pedestrians transporting goods. When there’s only one really good paved road, a lot of people use it, and the bicycles were piled high (well over the heads of their riders, in some cases) with produce – corn, potatoes, mangos, pretty much everything that was grown in the surrounding hills. Benon, our driver, said that most people here could afford only bicycles (if that), so they piled them high and transported their goods as best they could. And, for those who had no bicycles, walking with food and other goods balanced (seemingly effortlessly) on the tops of their heads was the way to go.

In the fields from which all that produce came, we saw no farm equipment save a few small trucks – no tractors, no combines, no harvesters, no labor-saving devices of any kind. Benon said that the great majority of the work was done by hand – the plowing, tilling, sowing, reaping – with the aid of a few farm animals (although those were in short supply – we saw most farm-workers tilling manuallly). In Rwanda, that was the result of a conscious decision by the government not to let large corporations automate farming, so that more locals could work on the farms, employing more people and keeping income in local communities. Most farmers were poorly educated, so had few opportunities for more highly-paid work in urban areas, and this allowed them to earn a living with dignity (and keep down poaching, which is a big problem in many African countries). From an American big-business perspective, this might have been a poor use of capital, keeping a ceiling on productivity and economic growth, but from a Rwandan perspective, it was all about employing as many people as possible, no matter what their skill level.

In South Africa, all over the slums and shantytowns (euphemistically called “townships”) we saw opportunity being created by people who had next to nothing. As we headed to our hotel from the airport in Johannesburg, our driver pointed out the ubiquitous, white, 10-passenger vans all over the roads. Some of these were owned and operated by residents of the townships, who were forced to start up transportation services of their own because no public transportation serves the townships and many residents work in the city proper (and many city-based taxis refuse to go to the farther townships). Our driver also pointed out make-shift poles and electric wiring in several shantytowns – with no electric service readily available, some enterprising residents set up businesses to help other residents tap into commercial power lines, “borrowing” electricity where none could otherwise be bought.

All the more remarkable was that, wherever and whenever we stopped to speak with local people – from the streets and small shops of Kigali, where we chatted with local craftswomen weaving colorful mats out of grass, to the Soweto townships outside of Johannesburg, where street vendors tempted us with Nelson Mandela hats, plaques, and t-shirts – the great majority of them were cheerful, upbeat, and proud. They had to believe in themselves, because they likely had others depending on them for food, clothing, and shelter, and because they had very little else but hope and hard work to carry them forward. In that respect, they reminded me very much of my own mother, a woman who never finished high school, whose husband died at the age of 41, leaving her to raise a child alone, while juggling jobs as a seamstress to make ends meet. When you have no choice but to rely on yourself because very few other people will help, you do whatever’s necessary to survive and succeed.

I was humbled by what I saw, by the conversations I had, by the grit and determination and hope I saw on the faces of the people we met. I was always proud of my own modest success, coming from a humble background, but this was worlds apart: growing up, I had a real roof over my head, not a piece of tin; I was able to walk seven blocks to my grammar school, not several miles; I wasn’t segregated because of my skin color into a neighborhood far away from everything that could have given me greater opportunity or made my life easier; I didn’t have to walk outside to a communal well to fetch water because my shanty had no indoor plumbing; and on and on. I had no excuses whatsoever for becoming or achieving anything I wanted to be, no matter how insurmountable the “obstacles” may have seemed to me, like having to travel over an hour by subway to get to high school in Manhattan, or work a part-time job on the weekends to provide my own pocket money. All of that was nothing compared to the obstacles many of the people we met faced every day.

So, what’s your excuse? You likely have running water, electricity, a roof over your head. You probably aren’t forced to live in a shantytown because of your skin color or religious belief. You know where your next meal is coming from, and you don’t have to deliver 70-pound sacks of potatoes uphill on your bicycle. So, what exactly is it that’s stopping you from achieving whatever level of personal freedom you desire? Make the time. Do the work. Believe in yourself. With all the resources at your disposal, you owe it not only to yourself, but to all those who have no resources at all, to achieve what you want to achieve – and then to help others do the same, in whatever way you can.